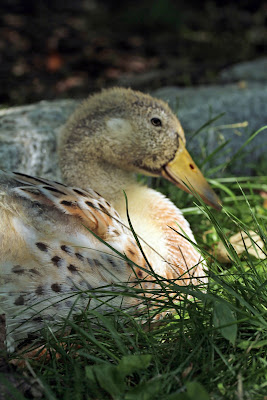 At just over five weeks of age, our flock of Welsh Harlequin ducklings are fairly independent.  We still feed them three times a day and shelter them from predators at night, but the rest of the time they're allowed free access to our yard and their swimming pool.  They barley fit in the foraging run I used to put them in to protect them from hawks - and I've seen neither hide nor feather of a hawk thus far - so as long as I'm not far from home, the ducks are out and about, foraging, swimming, and napping their days away.

Soon, it'll be time to make duck a l'orange of the drakes.  Right now, I still can't tell which are males or females.  But in about three more weeks, they'll be fully grown and I should be able to differentiate the sexes by the sound of their voices (only females will produce a true quack).  I'm having a hard time accepting that the ducks with darker heads are not males, but my duck rearing sources assure me that I can't judge their sex by color until around 15 weeks of age.  I wouldn't consider keeping them that long for a couple reasons: we've already got too many ducks on our hands, and they supposedly become very difficult to pluck after about ten weeks of age.

On a less clinical note, I truly adore dem duckles.  Just thinking about them warms the cockles of my heart.  I've spent hours and hours watching them, photographing them, talking to them.  They know the sound of my voice and come running when they hear me - whether I'm calling them or not.  When I'm in the yard, they never stray far from me and often settle down for a nap near me.  How could I not love them?  They aren't completely tame, but they can be stroked while eating and picked up without much fuss.  They used to freak out when handled, but now they take it in stride and instead of running away in terror when put down, they just go back to whatever they were doing before.  I purposely haven't put a ton of effort into handling them because the plan has always been to slaughter the males.  Once that deed is done, I will tame the heck out of our remaining egg layers.  And allow my attachment to them to deepen. 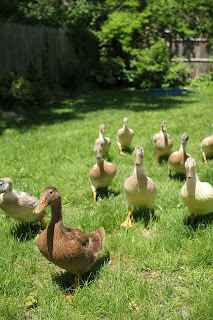 I don't know if they think I'm their mama or they just know I've got the food (maybe a litte of both) but they all come a runnin' when they see or hear me in the yard. 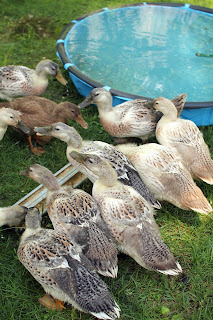 I'm feeding a combination of game bird crumbles and oats.  I always feed them close to a water source - it's okay for them to have water and no food, but not the other way around. 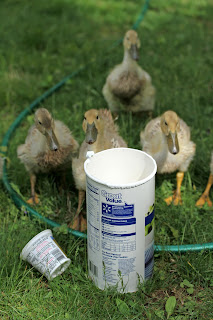 I'm cutting the high-protein game bird crumbles with oats so the ducks don't develop too quickly.  I wouldn't want them growing boobs before all the other ducks. 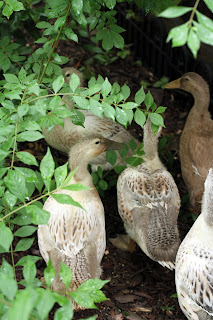 The ducks seem big enough to allow them to forage freely in the yard without protection from hawks.  Hope I'm not making a grave mistake! 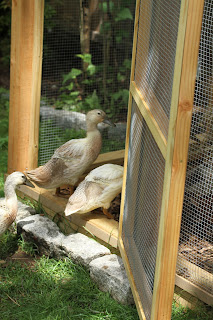 They go in and out of their house on their own.  They always get locked up at night to protect them from raccoons.  The hawks may not be onto our ducks yet, but the raccoons most definitely are.  I caught one climbing the sides of the duck house recently. 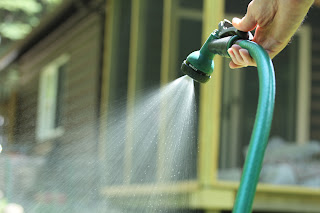 My husband sets the hose on mist. 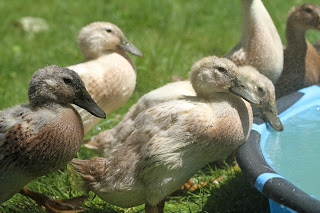 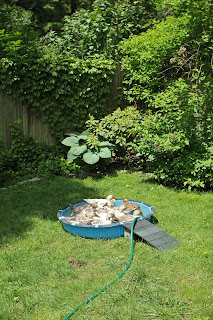 One of these days we'll build them a pond. 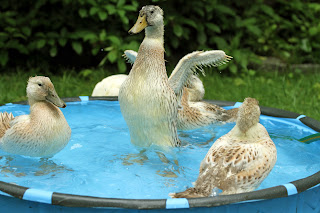 As ducks were bred for domestication and larger body size, they were not simultaneously bred for increased wing size.  As a result, domesticated duck wings don't grow big enough for them to truly fly. 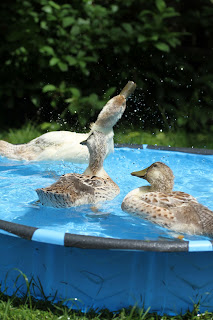 I often think of a phrase from my duck rearing book "the happiest animals in the barnyard". 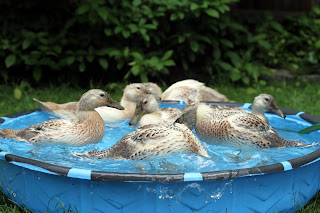 So many hours spent observing these charming animals. 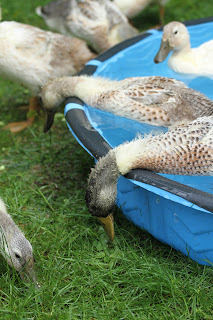 You're telling me that's not a male duck?  We shall see in another three weeks. 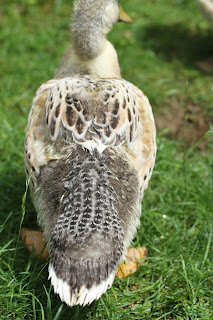 They aren't fully feathered yet.  Still fuzzy on the backside. 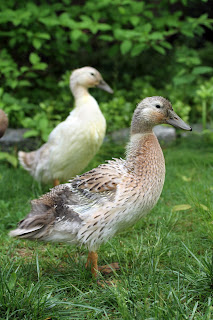 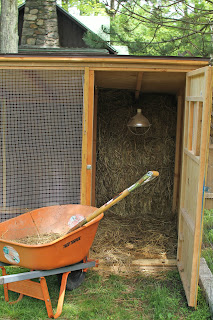 The reality of keeping animals. 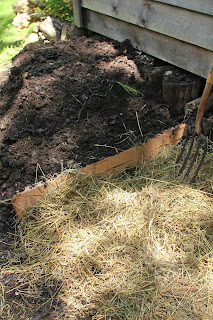 Gonna have some awesome compost this fall. 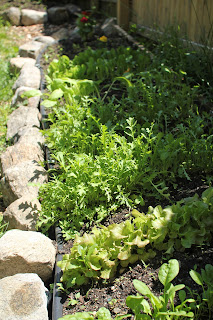 The ducks'll be eating their own poop in the form of lettuce from our garden. 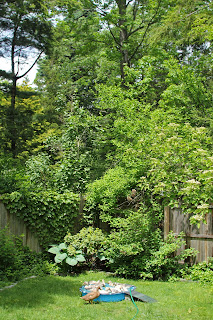 Check out my Etsy Shop!